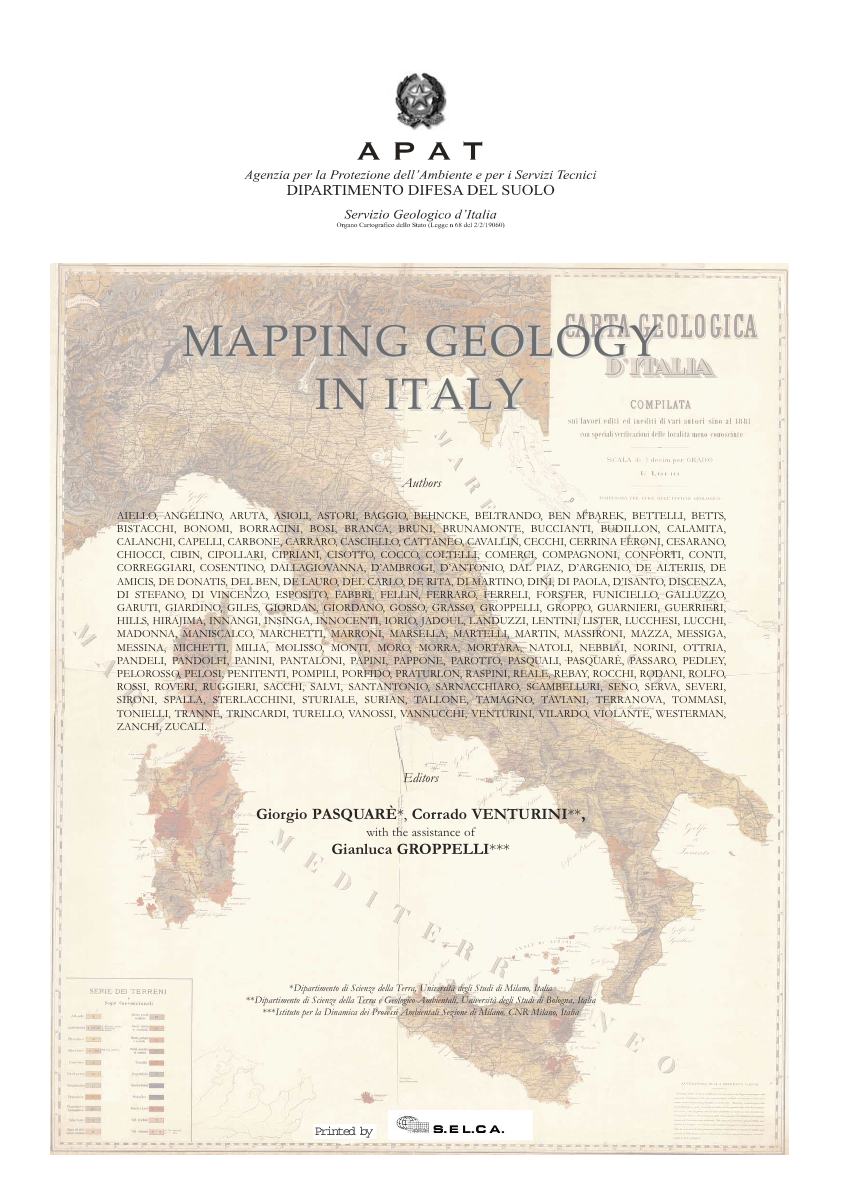 The initial page of each contribution features a background image excerpted from a geographic Atlas of Italy dating back to the second half of the 19th Century; the back of the same page shows the geological/geomorphologic map on which the contribution is based: This in order to create an ideal connection between two representations of the territory, separated by more than 100 years of geological investigations. The main purpose of the present work is to combine data, cartographic representations and evolutive interpetations, with the related research methodologies. Moreover, this volume is intended to foster dialogue between experts in the field of geological cartography, and serve as a didactic tool for Earth Science students and Earth scientists. We believe the above mentioned approach was agreed upon by all of the contributors of the present work, despite the inevitable differences in style and expression.

The first section of the volume provides a brief description of the geologic evolution of the Italian territory, and the final one contains a physical map of Italy where the location of the studied areas is indicated. Their cartographic representation is the ultimate synthesis of the methodologies adopted and described by the contributors.

The contributions that compose the present volume are arranged following thematic areas, starting from the ones dedicated to the Quaternary (marine geology, geomorphology, neotectonics and surface deposits analysis), to the ones related to recent and active volcanism, and then to stratigraphic, tectonic and kinematic topics related to the classic Apenninic Meso-Cenozoic successions. Finally, the deformative features of different Alpine basements are considered.

A special conclusive section is dedicated to the cartographic illustration of two geosite case stu- dies, for which a graphical project targeted to the lay public has been elaborated. Italy represents a huge archive of geological conditions and events, which, during the last 500 million years, left their undeletable signature in a very limited crustal sector.

Italy’s geomorphologic setting is the result of a series of processes that, combined with ever-evolving geological conditions, contributed to the shaping of the peninsula: A complex intertwining of depositional and erosive features, both subaerial and submarine, originated by the Quaternary, glacial and post-glacial events that interacted, and interefered, with eustatic and isostatic movements, magmatic events and, last but not least, man-induced modifications of the territory.

All the above represents just a short summary of Italy’s geology and geomorphology, which have never ceased to charm both the experts and the lay public, attracted by a compelling geological tale, told by generations of Earth scientists. Basic geological knowledge is best represented and conveyed through geological and geomor- phologic, 2D, and state-of-the-art 3D maps. Italians have always prided themselves on their cartographic production. It all started back at the beginning of Italy’s history as a unified country, when geological mapping studies were prompted by the need to represent landscape features, show the location of rivers and the distribution of mountainous areas, plan the siting of strategic communication and transportation infrastructures and individuate borders between countries for commercial and defense purposes.

The first evidences of cartographic activity in Italy date back to the Roman Imperial age, when a huge and marvellous road-map (redrawn from the original in the High Middle Ages and afterwards named “Tabula Peutingeriana”) was compelled. Since then, the process of collection and elaboration of data has continued uninterrupted to our day.

Two thousand years later, the Italian territory has still much to offer to the ones who are willing to unveil its mysteries and search for clues to its geological past.

Appuntamenti On The Rocks